About Andrew and Sacred Agents 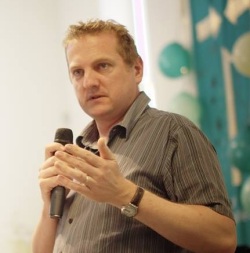 ABOUT ANDREW
Andrew Turner is a sacred agent who works as Director of Crossover for Australian Baptist Ministries.

He replanted and for 11 years pastored Glen Osmond Baptist Church, during which time it in turn planted several churches. He then became a church and mission consultant with Baptist Churches of South Australia, and with his family then joined a team to missionally reinvigorate a small church in West Beach SA. Since 2021 Andrew has served as Director of Crossover – a national Baptist ministry championing outreach and evangelism.

He is passionate about helping churches put their roots down deeply in God, flourish in local mission, and share Jesus more and more effectively. Married to Cathy with 3 cheeky kids, Andrew enjoys most sports (particularly cricket, AFL, basketball and American football and baseball) as well as board games and reading history which are both a lot more fun than they sound.

Years ago I was talking to a youth group about what it means to be a Christian. I was trying to show them that it is so infinitely more exciting than becoming an upright citizen who goes to church. I wanted to explode the mental picture they had of the prospect of becoming a Christian. Scratching around for a way to put it, I blurted out “It’s much more like being a secret agent!” You have this amazing life, a thrilling quest, while the people around you plod along with their mundane lives. Like Neo in The Matrix, you become aware of a massive contest of cosmic proportions being played out over the hearts and minds of people who are simply oblivious. You need to be smart, and alert, always on your guard. It can be dangerous. It becomes the biggest thing in your life – your choice of ‘career’ becomes a cover, a front, something you use for a higher purpose.

This is the thrill of being caught up in God’s mission – to become a Sacred Agent. Of course, I’m speaking of nothing more and nothing less than the age old idea of being a missionary. But perhaps it’s time for us to bring some new imagery to the table. There are so many different ways of serving God’s mission, but perhaps this blog can be a place where we compare notes and share ideas. I hope it will be an encouragement for many who long to recapture the thrill of the mission in the face of a tough assignment.

So jump in and join the conversation. I want this to be a safe place – you don’t need to be an expert to make a comment or ask a question. We’re all just trying to follow Jesus and be made fishers of people.

[This is now the archive site for older Sacred Agents posts. Posts from late 2021 onwards can now be found at crossover.org.au/sacred-agents]